The four-day Ministerial Conference started at WTO headquarters in GENEVA Switzerland on Sunday 12th June 2022.  This type of meeting is held every four-year to find some consensus among the various trading member countries. Negotiators from 162 nations sought to have convergence on a range of issues including WTO’s response to future pandemics and an IP waiver for vaccines, fisheries subsidies, WTO reforms, agriculture, food security, and e-commerce.

India's Commerce and Industry Minister Piyush Goyal was the man in the spotlight at the WTO's 12th gathering of trade ministers(MC12).

In order to have concessions on different issues, the meet was extended for one more day, that is, Thursday16th June. Everybody at the conference was hopeful that some positivity on issues will emerge at the end of the 5th extended day.

INDIA and many other countries sought an end to the ban imposed on fishing subsidies being given by developing countries for 25 years allowing only a transition period of 7 years. These countries also sought to put an end to non-specific fuel subsidies or those that are not targeted at a particular industry, such as those given by the US and European Union to transport and water sports that lead to illegal, unregulated, and uncontrolled fishing globally.

India wanted that developing countries not engaged in distant water fishing, beyond 200 nautical miles from the seashores of the country, should be exempt from fishing subsidy prohibitions for 25 years. Subsidies for fisheries in India include a sales tax rebate on diesel, financial assistance during a fishing ban, assistance for the purchase of new nets and boats, life-saving jackets, and navigation systems besides the development of marine infrastructure.  The draft agreement proposed that 'A developing country member may grant or maintain subsidies to fishing and fishing-related activities within its exclusive economic zone or area of competence of a relevant RFMO/A for a maximum of seven years after the entry into force up to 2030.'

Moreover, subsidies granted or maintained would be exempt from actions for two additional years after the end of the period, similar to the peace clause developing countries have for agricultural subsidies. Proposed that the developing countries may also give subsidies for low-income, resource-poor, and livelihood fishing or fishing-related activities, up to 12 or 24 nautical miles measured from the baselines.

Traditional fisheries involve fishing households using relatively small amounts of capital and small fishing vessels usually about 20 meters in overall length making short trips close to the shores. Most Indian Fishermen live below the poverty line.  If subsidies are stopped, their lives and livelihood will be endangered.  Subsidies should be stopped for industrial fishing and not for small fishermen.

It was for the first time that the draft outcome documents issued by thal WTO sought to pave the way for the formal entry of the private sector into multilateral trade talks as proposed by the European Union last year.  Developing countries like India and South Africa opposed it as this would allow private companies a high seat at the WTO negotiating table and influence processes and outcomes.

The draft outcome text on pandemic response also takes note of the work done by the WTO Secretariat, including in collaboration with other international organizations relating to covid-19. These international organizations refer to the private sector which the EU has been pursuing.   Any formal role for the private sector would cause grave asymmetry in the global trade talks as many governments would find it difficult to negotiate freely.  India has opposed giving any overseeing role to the General Council in the reform process of the WTO.

India, Pakistan, Cuba, and 44 other countries of the African group came together seeking a moratorium on trade measures and providing sufficient flexibilities on intellectual property disciplines for developing countries to fight the Covid-19 pandemic.  Developing countries should not be asked to relinquish their trade policy of permanent liberalization of tariffs or use of export restrictions. Such a moratorium should be for the duration of the pandemic for government actions to fight the pandemic.

The scope of the moratorium should also extend to e-commerce transmissions for predictability of business, trade, and industry.  Developing and less developing countries are keen to levy customs duty on e-commerce transactions and willing to use tariffs to support domestic industries.  These countries firmly stated that Special & Differential Treatment(S&DT) was a treaty-embedded, non-negotiable right of the developing countries.

The WTO was a forum that was never conceptualized to change the economic models of members.  The US and EU and other countries are trying to bring in non-trade issues in trade negotiations to address social and economic matters.  The reform process must support poor nations' access to affordable medicines and medical technologies vis-a-vis traditional knowledge.

On the penultimate day of negotiations, India along with 46 developing and least develop developed countries pushed for enhancing production and maintaining food price stability.  The countries as a part of G-33 also insisted on maintaining an open and predictable agricultural trade to ensure the continued flow of food and agricultural products. Global food prices are rising and there is a need to ensure public stockholding for food for all.

The G-33 African group and ACP (African, Caribean, and Pacific) group had already submitted a joint proposal suggesting a permanent solution for public stockholding that should account for inflation and the price based on recent reference price rather than old base of 1986-88. They also suggested a new methodology to calculate the subsidies either accounting for "accessive inflation" in the External Reference Price(ERP) or calculating the ERP based on the last five years excluding the highest and lowest entry for that product.  ERP is the average price based on the base years 1986-88 which has not been revised for years.  The G-33 emphasized that a universal, rules-based, open, non-discriminatory, equitable, and WTO-centered multilateral trading system is vital for global agricultural trade.  India must ensure that decisions in the WTO are compatible with multilateral climate agreements also.  The biggest economies have announced their intention to a net-zero economy.  India too has set this goal by 2070. Trade can't be insulated from the impact of greenhouse gas emissions. 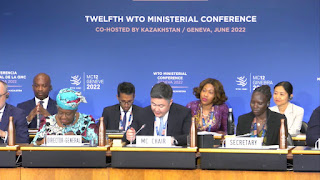 The session going on

SPECTACULAR SUCCESS ACHIEVED AT THE MC12

The Commerce and Industry Minister Piyush Goyal spoke on June 17 that India has achieved spectacular success at the World Trade Organization(WTO's) Ministerial Conference(MC12)in Geneva, Switzerland. Mr. Goyal had led India's delegation to the WTO at the four-day global summit which was extended for two additional days due to intense negotiations.

Round-the-clock negotiations among 162 delegates produced the "Geneva Package" confirming a historical achievement for the multilateral trading system. The package contains a series of unprecedented decisions on fisheries subsidies, WTO response to emergencies, including a waiver of certain requirements concerning compulsory licensing for COVID-19 vaccines, food safety, and agriculture, and WTO reform.

India was successful in ensuring the livelihood of its farmers and fishermen.  All participants at the MC12 were convinced in allowing a patent waiver for the manufacturing of Covid Vaccines. This conference has reestablished the positions of multilateral institutions by deciding the issues which were pending for many decades.

The agreement on fisheries is currently limited to illegal, unreported, and unregulated fishing. The discussions on subsidies will continue.  Currently, there are no restrictions on government subsidies. The WTO has taken cognizance of India's demand for regulating illegal deep fishing.

There is no negative outcome for India's agriculture sector. India's public stockholding program for foodgrains will continue unhindered. On the issue of food- security talks are going on. There is no curb on foodgrain exports to the World Food Program which seeks to fight hunger in places hit by conflicts, disasters, and climate change.

Suspending some parts of the TRIPS agreement would allow member countries to overcome the legal challenges posed by patents to ensure the timely provisioning of affordable medical products. However, the deal will only cover vaccines and is not related to e-commerce transactions

The WTO has also decided to extend again the moratorium on taxation on e-commerce transactions. WTO members have also agreed to not impose duties on electronic transmissions since 1998 and the moratorium has been periodically extended at successive ministerial conferences. India was strici opponent of the move and could initially block the continuation of the moratorium at the MC12.

In his closing remarks, Mr. Suleimenov Co-host from Kazakhstan spoke that the Conference was chaired by Timur Suleimenov and thanked the DG for never giving up. “Her determination, her leadership, her perseverance made all the difference. Dr. Ngozi, the WTO owes you a great debt.”

“Congratulations to you all. Congratulations on going beyond your national interests and looking to the common good that the WTO embodies, and in doing so, carrying out our shared responsibility to restore confidence in this organization. It is so much needed in these difficult times,” he added. 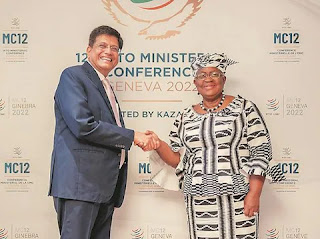 The Ministerial Conference requested the General Council to decide on the date and venue of the 13th WTO Ministerial Conference(MC13). There was an understanding that MC13 should ordinarily be held by 31 December 2023. Two proposals have been received from Cameroon and the United Arab Emirates to host the ministerial gathering.

India's landmark achievements over a decade are access to vaccinations, easing a food crisis, rolling over a ban on e-commerce duties, and curbing fishing subsidies.  However, the patent waiver for pandemic vaccines has been limited to production and export yet is less ambitious in scope. India could not secure an agreement on its proposal to export its grain stockpile. It also had to dilute its position on imposing duties on e-commerce to protect domestic industries.
The achievements may not be rated as great yet it stood against a trend of protectionism and also raised voice against the supply crises during the pandemic and the Ukraine War.  The energy crisis is forcing nations to rework supply arrangements and pressure is on in setting up processing units within national borders.   The food crisis is likely to create famine conditions due to restrictions on food export.
TRIPS WAIVER TO HELP DEVELOPING NATIONS
The Trade-related aspects of the Intellectual Property Rights(TRIPS) waiver for 5 years will help developing countries manufacture patented Covid vaccines to deal with the pandemic. India already has a number of Covid vaccines and can help other developing countries to make vaccines. Under the waiver, a country will be able to issue a compulsory license to make that vaccine without taking approval from the original maker. Export of these vaccines is also permitted. However, talks on including therapeutics and diagnostics would start after six months of this deal. India does not need any waiver for the Covid strain. India supported this move for the benefit  of other developing countries.  Indian pharma firms having patented technologies are ready to start manufacturing vaccines in other developing countries after the diagnostics and therapeutics come in effect.

Popular posts from this blog

Notification- Publication in UGC Listed Journals Is Not Mandatory

November 04, 2018
According to the latest  UGC regulations published in July 2018 , minimum research publications in UGC listed journals is no more a mandatory, but optional. According to the revised regulations, publications in peer-reviewed journals will also be considered for the appointment of academic faculty (Assistant / Associate / Professor / Vice Principal / Principal).  These regulations are issued for minimum qualifications for appointment and other service conditions of University and College teachers and cadres of Librarians, Directors of Physical Education and Sports for maintenance of standards in higher education and revision of pay-scales. Provided further that for appointment to the post of Assistant Professor and equivalent positions pertaining to disciplines in which the National Eligibility Test (NET), conducted by the University Grants Commission or Council of Scientific and Industrial Research as the case may be, or State level Eligibility Test (SLET) or the State Eligibi
Post a Comment
Read more