April 05, 2019
The Central Bank, on 4 April 2019, in its first bi-monthly policy review for the financial year 2019-20 has slashed the policy rate by 0.25 percent to 6% for the second time in a row.  More room for rate cuts was denied immediately in the face of impending General Elections from April 11 to May 18.

The output gap remains negative and the domestic economy is facing headwinds especially on the global front. The need is to strengthen domestic growth impulses by spurring private investment which has remained sluggish. The resolution of the bad loans will be an immediate concern for the RBI to issue revised directives to its member banks.

Fitch Ratings has rated  Indian Economy at BBB- showing lowest investment grade rating which has remained unchanged for the last 13 years. Election campaign promises to support farmers'incomes including direct cash transfers and farm loan waivers will add to spending measures in FY 2019-20. Next government is likely to have a smaller majority in the Lok Sabha and face problems in garnering support for major policy reforms such as GST.

According to Fitch, the Indian economy will grow by 6.8% for the FY20. The RBI also expects the growth rate to remain at 7.2% in fiscal 2019-20.  Capacity utilization still remains well below 80% and gross fixed capital formation has plunged below 30%. The only way for growth to pick up momentum is for banks to start lending again and for the government to revive public-private partnership (PPP) in the infrastructure incorporating the right lessons from the past mistakes. The new government should prioritize taking immediate economic reforms to take India to double-digit economic growth from the last years 7%.

The Government is close to meeting the fiscal deficit target of 3.4% of gross domestic product(GDP) for FY19.  In the light of above Economic Challenger has brought out its April-June 2019  issue. A close look to contents will make it amply clear. 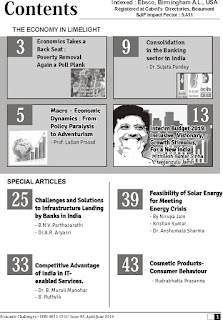 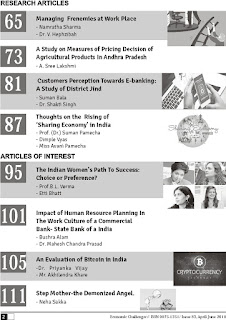 Popular posts from this blog

Notification- Publication in UGC Listed Journals Is Not Mandatory

November 04, 2018
According to the latest  UGC regulations published in July 2018 , minimum research publications in UGC listed journals is no more a mandatory, but optional. According to the revised regulations, publications in peer-reviewed journals will also be considered for the appointment of academic faculty (Assistant / Associate / Professor / Vice Principal / Principal).  These regulations are issued for minimum qualifications for appointment and other service conditions of University and College teachers and cadres of Librarians, Directors of Physical Education and Sports for maintenance of standards in higher education and revision of pay-scales. Provided further that for appointment to the post of Assistant Professor and equivalent positions pertaining to disciplines in which the National Eligibility Test (NET), conducted by the University Grants Commission or Council of Scientific and Industrial Research as the case may be, or State level Eligibility Test (SLET) or the State Eligibi
Post a Comment
Read more